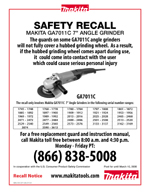 The grinder's housing is blue and the name "Makita" appears in large white letters on the housing. No other Makita grinders are involved in the recall.