MAKITA ANNOUNCES TWO NEW AND I... 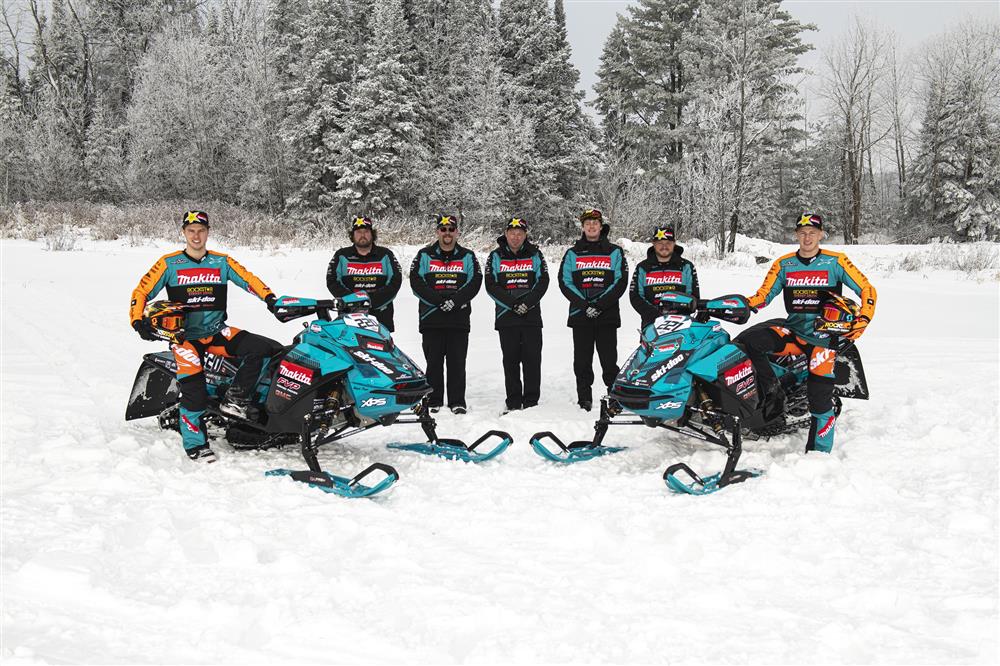 January 8, 2021, La Mirada, CA – Makita U.S.A., Inc. is excited to announce another snocross season with longtime partner, Warnert Racing. The Makita / Ski-Doo Racing team finished last season on top with 1st place in Pro-Lite class and 2nd place in Pro class. The leading Makita / Ski-Doo Racing team returns to compete in the International Series of Champions (ISOC) 2021 snocross racing season.
Makita is the Official Power Tool of snocross, renewing its long-standing partnership with ISOC, parent-company of the AMSOIL Championship Snocross. Makita’s extensive sponsorship includes race day activation and a prominent on-track presence that will be captured in season-long broadcast TV coverage by CBS Sports. The season begins in early January at Elk River, MN, and continues through the Winter months at race tracks across the Mid-West.
“We are proud of our partnerships with Warnert Racing and BRP Corporation, as well as our active sponsorship of ISOC,” states Brent Withey, vice president of brand marketing, Makita U.S.A. “We understand the challenges posed by COVID-19 protocols and appreciate efforts by ISOC and the racing venues to put the racers on the track this season. But whether fans are watching at trackside or through live-streaming and national TV coverage, they can count on exciting snocross racing, and Makita will be there as an active on-site sponsor and as a tool of choice in the pits.”
Makita provides Warnert Racing technicians with the necessary cordless power tools to keep the Factory Ski-Doo snowmobiles running, even in the coldest conditions. These tools are part of the LXT System, the world’s largest compatible cordless tool system, with over 275 products, powered by 18V slide-style batteries.
Warnert Racing enters the season with top talent. The Makita Tools / Ski-Doo Racing team includes Pro Racers Francis Pelletier and Daniel Benham.
“We are excited for the new season and will hit the slopes with high energy,” said Mark Warnert, co-owner of the team. “The Warnert Racing team and our partners continue to have a cohesive synergy, on and off the snow, that will lead to another successful season.”
As the Official Power Tool of snocross, Makita will support the sport with a comprehensive media program and the Makita Power Tower, the elevated on-track race managers’ communication platform. Makita will be fully integrated into all races with on-site activation including demonstrations and displays, allowing snocross fans to see the latest in Makita innovation. Makita has a long-standing partnership with ISOC, parent-company of the AMSOIL Championship Snocross.
About Makita
Makita is a worldwide manufacturer of industrial power tools, pneumatics and power equipment, and offers a wide range of industrial accessories. Makita U.S.A., Inc. is located in La Mirada, California, and operates an extensive distribution network throughout the U.S. Call 800/4-MAKITA or visit makitatools.com. Find Makita on Instagram, Facebook, YouTube and Twitter @makitatools
About Warnert Racing
Warnert Racing is the premier team in professional snocross racing and one of the sport’s pioneering “super teams.” The team is modeled after the most successful auto racing operations, managing the day-to-day operations of snocross racers, including sponsorship, transportation, marketing, sled set-up, driver development and technology development. Find Warnert Racing on Instagram and Facebook @Warnertracing
# # #
FOLLOW US:
CONTACTS: